A Riot of Goodness 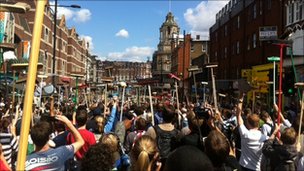 Todays mass cleanups - whose turnout probably exceeds those of the riots by a large margin - have been inspiring. The #riotcleanup and @riotcleanup tags on Twitter have been humming, and when the BBC interviewed a vicar in Ealing earlier today she said that many of the would-be-cleaners had been sent home because there was nothing left for them to do, such was the volume of help.

Email ThisBlogThis!Share to TwitterShare to FacebookShare to Pinterest
Labels: community