It's been fantastic to watch England steamrollering every team before them over the last 12 months. Bedtime stories with the kids have been replaced by an hour in front of the cricket highlights, and even as I write they are leafing through my old copies of Wisden looking up cricketing records. Result. 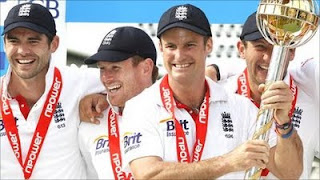 So a big well done to this England side, who have already more than surpassed the 2005 Ashes heroes by taking victory over Australia in their stride, and then doing even better in the months following.
Strauss is already talking about the winter tests against Sri Lanka and Pakistan; this England succeed consistently because they can give a series their all, whilst keeping their eye on the longer term.

Thankfully for everyone, I'm not an England selector, but here's a few thoughts on what we need to stay on top of:

1. Find a good opening batsman. Strauss totally deserves the 4 months break he's now going to get before the winter. He has presided over a dramatic rise in Englands fortunes, and deserves every minute of celebration, and of rest. But Strauss has started shelling catches at an alarming rate, and age is not on his side - he'll be 35 by the start of next summer. He'll retire a hero in the next couple of years, and Cook will need a new partner.

Longer term, Bell, Trott and Pietersen are 29, 30 and 31 respectively, and all at the top of their game. Fast forward 3-4 years and they will be an ageing unit, and England will need to find a way to blood quality middle-order players. Some will slot in straight away - Trott has been a phenomenal example -  but if others, like Bell (e.g Bopara?), need a few years to really hit their stride, it could be difficult.

2. Beat South Africa. India came to England off the back of a tour to the West Indies, with several players not match fit, and didn't have enough games to prepare themselves. Having said all that, to roll over the Indian batting line-up 7 times out of 8 for less than 300 was phenomenal. South Africa remain as the only proper contender for the top spot in Test cricket. Smith, Kallis, Amla and DeVilliers are all quality batsmen, Steyn and Morkel are top-ranked bowlers. The tragedy is that, thanks to ICC scheduling, the SA tour of England in 2012 has only 3 tests. With 5 ODI's and 3 2020s, there is scope for some meaningless 1 day cricket to be scrapped and replaced by what people really want to see, a 5 test series between two well-matched teams. I hope negotiations have already started.

3. Bowlers who can bat. India collapsed in spectacular fashion to lose the final test - you can't imagine this England batting line-up doing that. Who would you rather see coming out to bat at 300-6, RP Singh or Tim Bresnan? The current England numbers 8-11 average a combined total of 109.87 between them. The second choice 8-11 (Tremlett, Finn, Onions, Panesar) average around 40 combined. Injuries to bowlers are as regular as Boycott's opinions, so the likes of Woakes, Patel, Rashid, etc. are vital. England have replaced a bowling all-rounder (Flintoff) with a bowling unit who can all bat. Having raised the bar on the fielding skills of bowlers (step forward Jimmy Anderson), can England maintain the batting strength too?

4. Injury: the perpetual problem. All of the current England bowling attack have been out of the game injured in the last 12 months. The sheer quantity and remorselessness of the international calender guarantees that there will be more injuries, or people who cannot take the grinding mental strain of performing at peak level every month of the year. There will be more Trescothicks and Yardys. England's selectors need the equivalent of a replacement 11 on standby, and more due care and attention to scheduling and workload. I still don't think we've paid attention to the alarm bells. International cricket is consistently losing talent to injury (wouldn't the winter Ashes have been more of a contest with Shaun Tait in the mix?), and Englands team will do the same unless things change.

5. Keeping 2020 in perspective. There's no doubt that England have benefited this summer from the IPL, in both series. Malingas withdrawal from Test cricket to follow the money, and the jaded Indians are both traceable to the dollars now available for whiz-bang cricket. Nobody remembers who was the best one day team in the 1980s, but they do remember the West Indian test team. Nobody will remember who was the best 2020 team in 2011-15, but they will remember if England consistently dominate Test cricket. Yes it's good to have a successful one day side, but to really succeed England need to keep this in perspective. We will be kicking ourselves if Broad breaks down in a meaningless 2020 series and isn't available against South Africa next year.

And Finally
6. Stay out of Boycotts way. 3 England batsmen are closing in on Boycotts record of the most Test centuries scored by an England batsman. Pietersen, Cook and Strauss all stand on 19, Boycott is on 22, and Bell is closing fast on 16. By this time next year, Boycott will no longer be top of the charts. I'm sure he'll have something to say about that, and if not, Aggers will. Repeatedly.
Posted by David Keen at Wednesday, August 24, 2011