This evening should have been the PCC - Parochial Church Council - but that became one of several cancelled meetings this week. It goes in the shredder along with the Lent course, pastoral visits to the elderly, school parents evening, a Spring Fair, and sadly a wedding on Saturday which was brought forward to escape the shutdown, but still has too many key people for the Church of England restrictions, and so has been postponed.

Last night I had a call from a funeral director, who, thinking we were closed for everything, wanted to borrow some chairs for doing funerals on his premises. The funeral protocols are a bit vaguer than those for weddings, we can still do them, but with a minimal number of mourners, and discouraging the over-70s and those with underlying health conditions from attending. With the closure of Yeovil Crematorium from next week, I've also been peppering my Diocese with emails asking for permission to act as a substitute venue, not just for church funerals but for others too. We'll see...

The last 2 days have been manic. On the one hand, setting up the scaffolding for church life without the two things which often define us the most - the building, and the Sunday morning meeting. We have 2 churches, so we've been creating a contacts list for both, and a strategy for keeping in touch with everyone, whether they are part of a small group, on email, on Facebook, on a smartphone (and thus able to join a Whatsapp group), or just have a landline. There's a slightly different way of getting in touch with each 'layer' of the congregation. We already have a few people signed up who weren't members of the church, but want to keep in touch with what we're doing.

What are we doing? Daily prayer podcasts and video messages, trying to nail the tech for live streaming a Sunday service from Youtube, with liturgy posted on the church website for people to follow at home. An email/Whatsapp/Facebook communication template which gets key information out to about 90% of both congregations. Ringing round everyone who's not on email to make sure they know that Sundays (and everything else) are cancelled, but that they can join in online or at home. Next weeks job is creating a prayer resource for people to use at home - daily prayers, a Sunday liturgy we'll use each week, key contacts and websites, and a few other bits and bobs.

Our main parish church will be staying open, St James Yeovil, for personal prayer, and for donations to the local food bank, which is going to need every tin of beans they can lay their hands on. We're putting out some creative prayer stations, so that the church becomes more of a prayer space than a corporate worship space. Someone is down there every day saying morning prayer, the rest of us join in at 9am via the CofE Daily Prayer app.

The Community Centre at our other church, St. Peters, has become a vital community hub. Most of the groups have closed down, but we're trying to work out if there is a way of keeping it open as a community resource - it hosts a small library, and can be a collection point for various things (the latest is a large batch of wool from a house clearance, which our army of local knitters will be raiding on Monday morning). With all the free time that people are going to have, it may be viable to set up a fresh food bank, with unsold produce from the local Co-op, which we've been offered but never had the team of volunteers able to make it happen.

Meanwhile in the community, we've managed to cover nearly half the streets in a 2000 home neighbourhood with these things 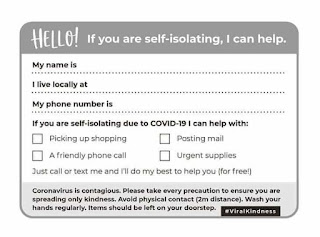 Having a strong community Facebook group has been a massive help, through one post on that, we've been able to circulate a list of streets and co-ordinate deliveries. We've left a pile in the church, and in the local co-op, for people to help themselves. I'm hoping we run out and need to reprint for both.

I have my ups and downs with social media - I quit Twitter about this time last year because it just seemed to be full of angry people being angry with each other, and I always came off more agitated than before I logged on. But it has been such an asset this week, being able to use email, Facebook, youtube, Zoom (video conferencing - going to try Morning Prayer with a group of 10 people on Monday, if that works we might roll it out to the whole congregation), Whatsapp, Anchor podcasts, they've all been excellent for getting the tools and the infrastructure for keeping in touch with most of the congregation. For those not on social media, we're setting up 'phone pastors' who will have 6 people they ring every week, to keep them in touch.

I normally get 30-40 emails a day, today it was 100, and Facebook in Yeovil has been white hot with groups, initiatives, offers of help, key communications, plus the odd idiot who's required me to put my group moderator hat on.

I work from home normally, I'm fairly happy with my own company, I regularly do quiet days and occasionally do retreats -the best was 8 days in silence. So I'm ok with social distancing, and once I've got used to having hardly any face to face meetings, it probably won't be too much of a trial. But for those who are reliant on being/getting out and about, who have to home school their children for 3+ months, who rely on the visitors they get, etc. etc. this is going to be very hard.

At the same time, this could be an incredibly fruitful time. I know someone who has borrowed a cello so they can self-teach during what would have been the summer term. Already lots of creative ideas are appearing on social media. Without all the time and energy which goes into Sunday church, we're going to discover a new, less busy, and maybe more authentic way of being the church. We're going to find out what shape we become without a building and a Sunday meeting to shape and define us. We're going to have chances to bless and love other people that don't present themselves in normal times. I'm praying we rise to the challenge, that we grow, that it's the acts of kindness and not the selfish and life-threatening stockpiling that define us.

And finally... it's going to be a long tunnel. If the restrictions are too effective, we'll come out of them in June/July with only a fraction of the population having been infected, leaving everyone else vulnerable of a second flare up. So how long do the restrictions stay in place? As long as Covid-19 is out of control somewhere in the world, there's a chance of it getting everywhere again. If we do flatten the curve, the only safe time to go back to normal is when we have a vaccine, which is by all accounts 12+ months away. If the efforts are not a success, the restrictions may lift sooner due to the 'herd immunity', but at a catstrophic cost in the meantime. Where, and how, will it end? The main factor is our behaviour. It's up to us.
Posted by David Keen at Friday, March 20, 2020

Email ThisBlogThis!Share to TwitterShare to FacebookShare to Pinterest
Labels: coronavirus