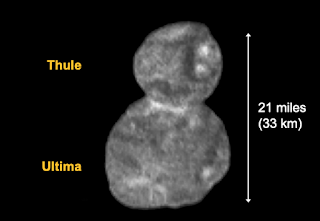 Its a busy week in the night skies. First we took pictures of a giant monkey nut on the edge of the solar system, Ultima Thule, which turned out to be two giant rocks stuck together. Did Tangerine Dream know this when they released 'Ultima Thule Part1 and Part 2' back in 1972?  Unlikely, as it was only discovered in 2014.

Closer to home the Chinese landed a craft on the so-called Dark Side of the Moon, (which gets exactly the same amount of sunlight as the other side).

The Moon is a remarkable thing
- it takes exactly the same length of time to rotate as it does to complete a single orbit of the earth, meaning we face the same 1/2 of the moon all the time. You'll have to check with NASA whether that makes moon exploration any easier, I'm guessing it does.
- it is exactly the right size and distance in proportion to the sun that a full solar eclipse blocks out the suns disc but allows us to view the corona. Again, that's quite handy in a number of ways.
- it is the right size and distance to create significant, but not (usually) life-threatening tides on the sea-dominated earth, which moderate the climate, distribute food, support coastal eco-systems, aid navigation, and should provide for tidal power if we ever get round to funding it properly.

It's almost like someone set it up that way....

Anyway, back to the Far Side of the Moon. If you lived there, would you know about the Earth? It would be the centre of your universe, the context in which your 'planet' lived and moved and had its being, the original source (many think) of its existence, but you'd never see it. You wouldn't even be aware of it. It would only be possible to see the thing if you made a long journey round to the other side. In the meantime you might be tempted to think that everything else orbited around you.

The third astronomical phenomena of the week is Epiphany, this Sunday, when MASA (Magi Amateur Stargazers Association) despatched a mission to a distant satellite, investigating new and strange events in the night sky. At the end of a long journey, they found the source of life, the centre of the universe. They discovered more in that one journey than any lifetime of study. The heavens declare the glory of God, the skies proclaim his handiwork (Psalm 19).

For scientists who study the heavenly bodies, the study is one thing, but to actually see the object of your study is something else entirely. Epiphany means 'unveiling', the God who can not just be known about, now he can be seen.
Posted by David Keen at Friday, January 04, 2019