Signs in the Sun, the Mail and the Star

In the same week as the various apocalyptic forecasts for the future of the UK, it's once again time for the Church of England lectionary (set readings for each Sunday and weekdays) to hit the spot.

“There will be signs in the sun, moon and stars. On the earth, nations will be in anguish and perplexity at the roaring and tossing of the sea. People will faint from terror, apprehensive of what is coming on the world, for the heavenly bodies will be shaken. (Luke 21:25-6)

Which is all standard biblical picture language for 'things are about to get really nasty, nobody will have a clue what is going on, and it will feel like the end of the world'. Within 40 years of Jesus' words the Roman emperor changed 4 times in a year following Nero's suicide, each with their own army. 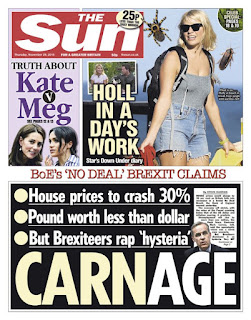 On the radio yesterday someone was sketching out a scenario in Parliament where Teresa May was ousted, her Conservative successor lost a vote of confidence, and Labour won the election. They didn't spell out how Vince Cable would end up Prime Minister at the end of all that but these days, anything's possible.

Jesus warning in the light of the Europe-wide convulsions, and their grim impact on his homeland was: Be careful, or your hearts will be weighed down  either by indulgence or by anxiety. These have always been the two standard ways we deal with bad news and bad situations to avoid praying: blot it out or fret over it.

There is a third way: watch and pray. As if to illustrate, the same passage from Luke concludes with Jesus heading away from Jerusalem to Bethany, the garden of Gethsemane was on the route, and Bethany was Jesus place of retreat and hospitality. It's from the place of prayer that we see clearly. William Wilberforce credits the practice of Sabbath with keeping him focused and persevering on his great work.  "Blessed be God for the day of rest and religious occupations wherein earthly things assume their true size and ambition is stunted…" I wonder if there's a connection between the Prime Ministers remarkable resilience and her regular Sunday worship. Can any politician lead well if they are in the swirl of events 24/7/365?
Posted by David Keen at Thursday, November 29, 2018