In 2012 I wrote this piece about the future of the Church of England, especially its clergy. It remains the most viewed and commented article on this blog. I wrote: The stats project clergy numbers forward to 2016. I would suggest that someone needs to go further than that.

Well, if you wait long enough….. As part of the Renewal and Reform initiative, the CofE has now published stats on clergy numbers, projecting forward to 2035. It makes the case for the national CofE target of increasing the number of ordinands by 50% year on year.

The Stats: a few highlights 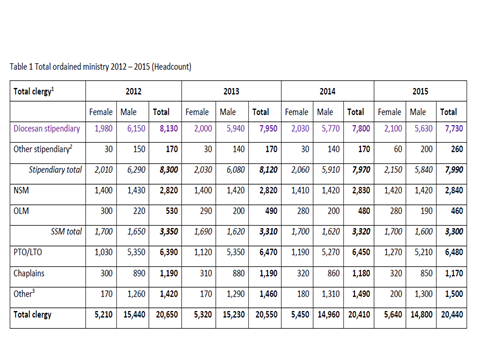 There are various other stats – on ethnic minority ordinations (rising, but still too low), age profile, gender profile etc. But the thrust of the main document is to set out 4 scenarios for clergy numbers, projecting forward to 2035:

-       Retiring later – clergy retirement age rises 1 year (pretty realistic, it would now make much more sense for me to retire at 68 than at 65).

-       Increase of 50% in ordinations from the current average, and the age distribution of females matching that of males (i.e. more younger women), sustained long term.

Here’s how those pan out (sorry its a bit blurry, the perils of copying from a pdf): 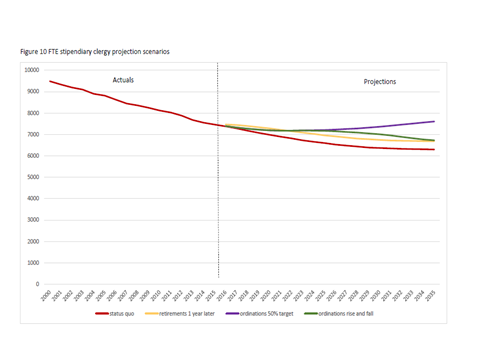 The worst scenario (status quo) gives us 6300 stipendiary clergy, the best (sustained increase) means we hold steady–ish at 7610. With more people going into training, there’ll be a higher percentage of curates than at present (23% to 14%). 66% will be ‘incumbent status’ – i.e. there’ll be 5022 vicars.

“the scenarios presented address those aspects that seem most likely or can be influenced by policy decisions” says the commentary.

I have a few questions to ask of the data, and of our response to it:

b)    Whilst making the case for a 50% increase in vocations, the papers from the CofE don't say very much about how this can be done. There are 2 strands, one is an overall rise in ordinations, the other is towards more younger female candidates (most of the under-30s are men, most of the over-45s are women). We have the diagnosis but the prescription is still a work in progress. The younger candidates themselves are clustered in Dioceses with higher student populations (London, Ely, Bristol, Sheffield, Oxford)

c)  The average age at stipendiary ordination is 40. These are the ones who will end up running a parish (we have 13000 parishes). If average retirement age stays at 65, that’s an average 25 years per person. So we’ll need to replace 1/25 of the workforce every year just to hold steady. Currently that would mean 309 ordinations a year, which is actually only a 10% rise on what we’re doing.

d)    But: 2670 clergy are currently in chaplaincy or other non-parish appointments. The projections assume no change in that – i.e. we will continue to have to ordain enough people per year to maintain this figure. Based on the 21 year average working life after a curacy, that’s 127 stipendiary ordinations a year to maintain chaplaincies, agencies, dioceses (our diocese currently has 11 clergy on its paid staff). Could we do more to promote lay ministry in posts currently held by clergy – Archdeacons? Chaplains?

e)    And the other issue not addressed is the drop out rate, with nearly 100 people leaving stipendiary ministry each year and either retiring early or leaving paid ministry altogether. I could reel off quite a list of clergy I know who have burnt out, dropped out, stressed out, or (often under pressure) done something which has made their ministry untenable. Compared to, say, recruiting and training an extra 10 people per year, how much does it take to retain 10 people per year?

which leads me to my final point. I wrote this in 2012 and it still stands:

If the current figures merely flatline ….. each full-time vicar will be looking after an average of 3 church buildings in 2.5 parishes containing 10,000 people between them, with 200 regular (once a month or more) worshippers. They will take an average of 29 baptisms a year, see 5 new people confirmed, take 12 weddings and 34 funerals. Less than half of them will have any kind of informal meeting space, toilet facilities, or kitchen facilities within church premises, which will severely limit their ministry to the community. And they'll each have roughly 1 CofE school, no doubt with a 'tradition' that the vicar is chair of governors. Oh yes, and they'll be encouraged to develop 'fresh expressions of church' as well.

We need to devise a way of being the CofE that can function with only 5000 full time staff, alongside the small army of volunteers, lay ministers and unpaid clergy. And we need to work out whether the paragraph above is a realistic job description.

I forgot to add church councils to the above description (4-6 meetings pa per parish, plus AGM, and trying to recruit 2 churchwardens, secretary, treasurer, safeguarding officer, H&S officer in each church). How can we make the job less of a burden, whilst providing more support? If half of clergy don’t feel that their diocese appreciates or supports their gifts and skills, then surely we need to look at how we help the current crop of clergy to thrive and survive, as well as  how we add to their number?

At the moment the system is buttressed by 6500 retired/non-active clergy who, with 'permission to officiate', keep the show on the road. Just as we have a blip of retirements coming up, so we will have a blip when God finally retires his servants and they join the heavenly chorus. By 2035, we won't have as many retired clergy either. And we shouldn't have a system which depends on them in any number, whether it's 6 or 6000.

Update: One final thought, if the CofE is planning on the 2500+ in non-parish ministry continuing, why are we still training people as if they will all end up as vicars? That is a massive number who are trained for one thing, but end up doing something else. We are either wasting a big chunk of our training budget, or at the very least misdirecting it.
Posted by David Keen at Wednesday, September 21, 2016