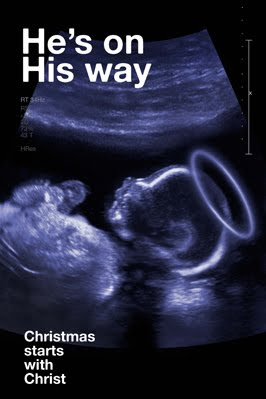 In a valiant attempt to trump World Cup fever with the Christmas rush, the Churches Advertising Network have unveiled their contribution to Christmas 2010. I was impressed with their bus stop nativity scene last year, and this is just as provocative and eye-catching.
More thoughts on this at Phil's Treehouse, Deiknuo, and Bishop Nick (responding to some of the scoffers), and I particularly like his conclusion:
This poster is designed to arrest the attention of the usually disinterested. It is aimed at awakening the imagination, teasing the curiosity and provoking fresh consideration of the heart of Christianity – precisely what Jesus did with parables, images and stories. No, it doesn’t cover all the bases and deal comprehensively with every theological nuance; but it gives a huge kick start to thinking about what Christmas is all about.
Elsewhere the Daily Fail , like SPUC, tries to turn this into a story about abortion. There's a different perspective from The Lay Scientist.
Just to re-read that tagline: Christmas starts with Christ. Not a debate about abortion. Wouldn't it be sad if an ultrasound image, the first picture of a new life, just became a symbol of a debate about death?
Though at least I now know what happened after my wife swallowed her wedding ring.
Posted by David Keen at Thursday, June 10, 2010